On Wednesday, May 20, 2015, the agency will launch an exciting new tool, a “virtual classroom” hosted by Ethos partner and sports celebrity Everson Walls. “It is important that students become aware of their true potential and inspired to appreciate life, learn from others and take charge of their future,” said Walls. ”No matter what you do for a living, positive character traits exists in successful people.”

Heisman Trophy winner, Hall of Fame Inductee Class of 2015 and Ethos partner Tim Brown will host a “virtual classroom” and discuss his career and the character traits needed to obtain long-term success as it relates to character development on July 21, 2015.

Through the virtual classroom, a one -on-one relationship is developed with Brown and Walls and other sports athletes and celebrities to allow students to share their own personal thoughts and challenges. Using the agency’s award-winning “You’ve Got The Power!” approach, Walls and Brown will engage the students while teaching the practical applications of the character traits in their individual lives.

“The award winning curriculum works to improve the educational experience of each student by redefining success in order for them to achieve in most cases, generational change by reaching out to them in their current environments so they are motivated and inspired to learn”, said Michael Davis, CEO Ethos Education Group.

Ethos Education Group launched its life skills program for students/ athletes at Heritage High School in Frisco, Texas last year. “Our mission for the pilot was to empower students to make positive life decisions in the areas of education, physical and mental health, relationships and character development,” said Brown. “The statistics showed the participants felt they possessed the power to define their success as future leaders.” The following program outcomes show the success of the program:

Academic performance statistics after going through the program:

Participants in the “virtual classroom” can also realize the ultimate Tim Brown Hall of Fame Experience and make Pro Football History by joining an online sweepstakes. Two lucky prize winners will receive two tickets each and all travel and hotel expenses to accompany Tim Brown and his family to the NFL Hall of Fame Induction Ceremony in Canton, Ohio, August 6 through August 8, 2015. The winners will be part of a weekend Hall of Fame Experience including the Gold Jacket Dinner where football greats, Tim Brown, Jerome Bettis, Charles Haley, Will Shields, Mick Tingelhoff and a representative of Junior Seau will receive their official Gold Jackets. Other activities filling the action packed weekend for the winner will include the Enshrinement Ceremony where the honorees will take their place among football’s elite; the Hall of Fame Parade and the Tim Brown Official Induction Party. There are no other events where fans can see so many of the game’s greatest former players gathered in one place. Nearly 700,000 people are expected to attend the televised weekend of events.

All proceeds from the Tim Brown Hall of Fame Experience will support the Ethos Education Group mission which is to improve the educational experience of students by redefining success through understanding their identity and self-value. “I learned that building character helped me overcome challenges which were empowering and led to my successful career,” said Brown. “I know participants can build positive character traits early and reverse the disturbing trends that may lead some to prison rather than college.”

Ethos Education Group (Ethos) is a nonprofit organization whose mission is to promote and deliver a character development program called “YOU’VE GOT THE POWER!” This program is a collection of written, online, and seminar tools that engage, motivate and inspire youth as they move along the path of evolution from childhood to adulthood. Ethos is a registered nonprofit corporation in the state of Texas and is a tax exempt of Federal Taxes under section 501 © 3 of the Internal Revenue Code.

Davis learned a lot about character traits while a student athlete on scholarship at the University of California at Berkeley. Davis was a three year starter for the Golden Bears football team and was elected Captain in his senior year. He graduated with a B.S. degree in Business Administration with honors in 1994 and pursued his dream, a career in football. He played for two years in the Canadian Football League but his career was cut short due to injuries. He was the recipient of several prestigious academic awards while at Berkeley so he went back to school on a Martin Luther King Jr. Fellowship and received a MBA in finance and investment from Northeastern University. He then created a successful career as a financial manager in Texas Instruments’ world renowned Financial Development Program. Because he knew first hand the effects of a sports career cut short, in 1998 he established My Brother’s Keeper Management Group, a sports management company. Ten years later he leveraged his relationship with prominent professional athletes to develop Genesis Curriculum Services and Ethos Education Group to improve the educational services of children nationwide.

Armed with a sense of respect for himself and others from his parents, Everson Walls used this principle to excel on the football field. He became a star at L.V. Berkner High School his senior year when he led the division in interceptions. His impressive record led to a football scholarship at Gambling State where he excelled in all positions in the secondary. Following college he signed with the Dallas Cowboys and played for eight extraordinary years. He was named to the Pro Bowl for four years and led the NFL in interceptions for three years. He continued his career with the New York Giants and the Cleveland Browns. In 2015, Mr. Walls was inducted into the Texas Sports Hall of Fame. Walls has partnered with Ethos Education Group because he believes in not only giving back to the community but their philosophy on building character especially among young athletes. “No matter what you do for a living, positive character traits exist in successful people,” said Walls.

Heisman Trophy winner and Hall of Fame Inductee Class of 2015 Tim Brown learned a lot about character building during his outstanding career in the National Football League. A native of Dallas, Texas he played football at Woodrow Wilson High School and despite their dismal record Brown was a highly sought after recruit. He attended the University Of Notre Dame in Indiana and set records throughout college. The Los Angeles Raiders chose Brown in 1988 and during his first season he held the most yards per return average, return yards and kickoff returns in the league. He is a nine-time Pro Bowler as a kick returner and receiver. He also set franchise records for receiving yards, punt return yards and receptions. Brown retired with the second highest total receiving yard in the history of the NFL. Brown then turned to mentoring and educating youth facing low self-esteem and other serious challenges. As a partner with Ethos Education Group he believes there is a great need for their character program in all the public schools. “We must teach our youth how to embrace their own value so they can truly shine.” 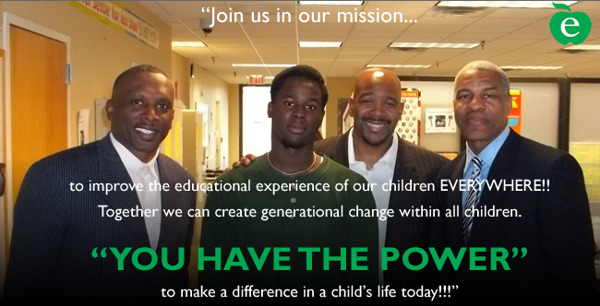